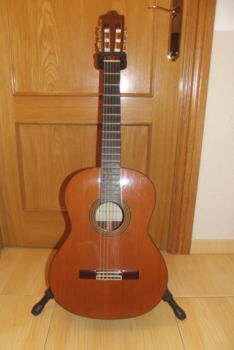 Vicente Camacho [1928 to 2013] made guitars from 1960 to 1993 in Madrid, Spain
The son of a reputable cabinet maker, don Vicente P. Camacho was born in Madrid in 1928. He worked at his father’s shop while attending school to become an industrial designer. A music lover, he played lute and requinto in a estudiantina. Later on, he formed a musical group that consisted of guitars, requinto, maracas, and vocals.

At age 19, young Vicente took his guitar for repairs to the famous luthier Modesto Borreguero a friend of the family, and then only survivor of the officers who worked at the Manuel Ramirez workshop in Calle Arlaban, Madrid. The other two officers, Santos Hernandez and Domingo Esteso had already departed. It was at this time that Modesto asked Vicente to joint him at his shop to learn to make guitars. Vicente became the only disciple of Modesto Borreguero, who died in Madrid in 1969.

In 1960, Vicente opened his own shop and started making guitars. His famous senorita model (3/4 size) guitar became famous in England. He also made requintos. In fact, his first requinto was made for the famous Trio Los Panchos, a Mexican vocal/guitar trio from the 1950’s. The best punteo ever was done on a requinto by this trio.

Vicente Camacho’s first guitars were sold in Madrid and Barcelona. Once people started becoming aware of the high quality of his guitars, they were in demand in Europe, United States, Japan, Mexico and Argentina. Vicente worked alone and did not have any disciple.

Vicente Camacho designed a cross-braced system for the guitar top that produces a loud and clear tone even in small body guitars. The tone is well balanced and projects really well. If you have heard El Trio Los Panchos, you will recognize the sound. Camacho’s guitars are also famous because they were one of a kind piece of art. Every single part was made by the luthier, except the machine heads. His rosettes looked similar to each other but were different. The design matches the bridge. None of his guitars is equal to another. He made small scale guitars by demand. He used spruce, cedar, Indian and Brazilian rosewood mainly.

Camacho was very well known in London, where his guitars were sold by the London Guitar Studio. An interview with Vicente Camacho was published by Classical Guitar Magazine in July 1986.

Some of his guitars have Garrido brand on the sound hole label (circa 1960s) as he sold his guitars fro many years through this Madrid store.
Cette annonce a été lue 1794 fois 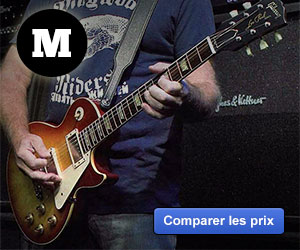